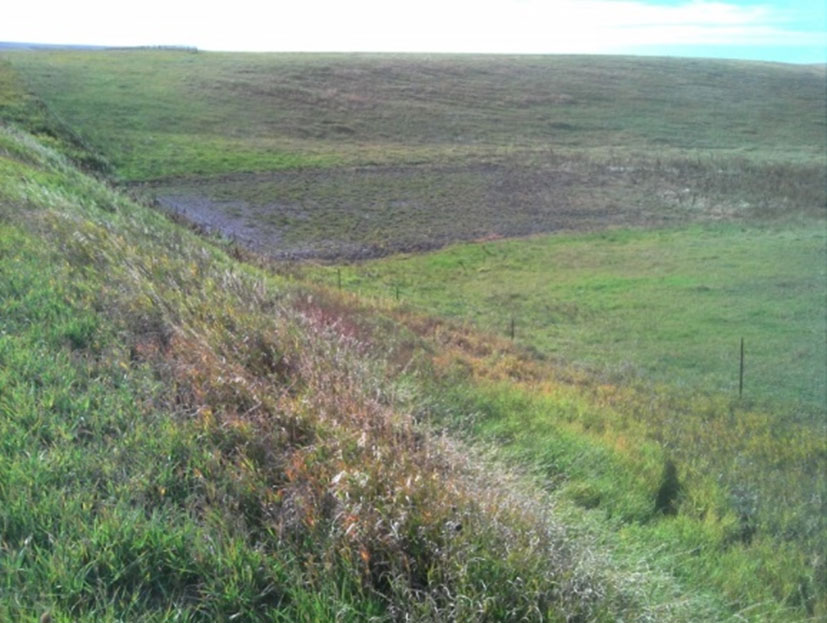 The project will consist of reconstructing approximately 8.4 miles of the existing Highway 5 from Reference Point (RP) 15.5 to the town limits of Westby at RP 23.9. Then approximately 0.3 miles of plant mix surfacing (PMS) overlay will be constructed through the town of Westby to the project termination at the North Dakota state border. On February 7, 2013, we reviewed the proposed alignment to identify potential geotechnical concerns and to assist in development of our scope of work.

The reconstruction will generally consist of widening and shifting the horizontal alignment to the north about 15 to 25 feet. The existing alignment will generally be incorporated into the new roadway, which will be constructed to current design standards. The alignment generally extends through rolling, rural terrain with several cuts and fills and are situated in glacial deposits that have resulted in multiple “kettle” formations. The kettle formations are generally depressions left from melting ice blocks resulting in several small wetlands that are not readily drained. The alignment extends through several of these wetland areas. Due to the difficulty of wetland mitigation, it will be desired to limit encroachment into the wetlands, as much as practically feasible.

The new horizontal alignment will generally follow the existing alignment, with the exception of the 15- to 25-foot offset to the north. One sharper horizontal curve was observed at about RP 20.5, and we anticipate some horizontal realignment may be required in this area to meet design standards. Due to the rolling terrain and limited site distances, we anticipate cuts and fills up to about 5 to 10 feet from the existing vertical alignment may be required to meet current design standards. However, cuts and fills up to 20 to 30 feet could be necessary for the shifted-north portion of the alignment.

Fairly severe snow drifting occurs during the winter months along the alignment, and flattening of the cut slopes or raising grade may be required to reduce snow drifting problems.

An existing timber bridge is present at RP 17.0. This bridge is supported on timber piling, but it is planned to replace this structure with a concrete box culvert.

For the basis of our proposal, we have assumed the majority of the wetland areas will not have standing water present at the time of our fieldwork. The exception is the wetland at about RP 18.2, where ice/standing water was observed both north and south of the current alignment. We anticipate new embankment in this area may need to be advanced across open water. At about RP 21.5, a pavement patch was observed, and it appeared it may be related to perennial water seepage emanating from the hillsides to the north. Special attention to potential drainage issues in this area will be required.

SK Geotechnical is currently working on the Activity 106 geotechnical work for the project. This work consists of obtaining representative subgrade samples along the current and proposed alignments and develop preliminary typical sections, and evaluate subgrade conditions for the future alignment. This work will also be used to evaluate the proposed horizontal and vertical alignment and develop recommendations regarding changes to the alignments. A total of 31 soil borings were performed and laboratory testing is currently underway.